+6
In case you missed it, we released Dialog Pages and Workflow Procedures last week.

Following up on our workflow improvements, we are currently developing Widgets Actions for the AIMMS WebUI.

These will allow you to take actions close to where your data resides (like a right-click menu).

A small preview is available in the screenshot below. 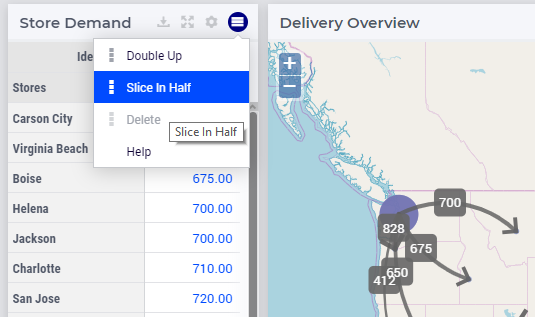 +7
An AIMMS IDE installer and documentation about widget actions can be found
here
This link is valid until June 1, 2019.

Great to have this released!

Is this v4.66 a stable version that can be used for client work or should it be for experimentation only?

I'm willing to dive in, but the boss and clients are a bit more conservative than I am. I need to make sure I don't kill any official projects I'm working on.

My pet projects will all get this, though, for sure!

+6
Just to be clear, this is not a formal release, this is a pre-release (experimental stage). The formal release will be made available through the regular release channel (see https://aimms.com/english/developers/downloads/download-aimms/release-notes).

We are offering these versions to get feedback in advance of the official release, and/or to allow you to prep for usage once the formal release it out (so you have a running start). This release has not gone trough the full scrutiny of a formal release and is not available for deployment on AIMMS PRO or AIMMS Cloud (only local desktop version).

PS: We expect to formally release this next week (if all goes well).
Gertjan, AIMMS

Thank you so much - that helps.

And thank you for including us on this. It's exciting!

This installed as 64bit - is there a 32bit version?
~Bon Crowder, Data Scientist

+1
Very nice to see the widget menu in action!

Two questions from my side:
Thanks!

+7
: The preview doesn't provide a 32 bit installer, the official release will.

: I've added the icon list to the preview folder.

- is there an electronic version of the icon list? Some of the CSS mappings are too long to fit in the boxes. You can guess at some, but the ones like aimms-connection have 4 icons and clearly 3 of them must have a -something as a suffix.

Thanks so much!
~Bon Crowder, Data Scientist

Documentation includes info on icons; once we make Page Actions available via the model, we will also extend that set to all icon options Widget Actions has.

Regarding the item-based actions, we decided to first start with actions on Widget level and learn from experience by our customers before building the item-based ones (in-cell, on gantt-chart job etc.). Believe that most actions that you can do per item, could also be done via the widget actions due the its flexibility nature via the model making the other not needed.

This release can be downloaded from https://aimms.com/english/developers/downloads/download-aimms/
The documentation about widget actions can be found at https://documentation.aimms.com/webui/widget-options.html#widget-actions

In case you were using AIMMS 4.66.52646.2, please remove it.
The download folder of this thread is emptied.

(and ), y'all don't forget an e-copy of the icons so we can call them properly.

+7
The icons are available as the IcoMoon list. Hover over the desired icon and write down the icon name. Append ‘aimms-” to the selected icon name when adding it to the model.

+6
Initially, the Widget Actions were made available for the following widgets:

Based on user feedback we will be adding it to the Scalar Widget, the Slider Widget and the Legend (it's currently in development).
Gertjan, AIMMS